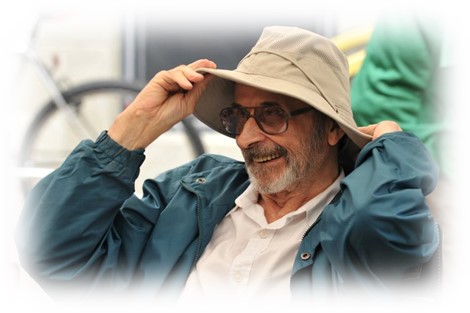 Jorma (Jerry) Eric Makela was born in 1936 in Finmark, Ontario to Eric and Fanni Makela.  He had an older brother and sister, Sulo and Aura, and then a couple of years later a younger sister, Arme.  His birth was registered in town by brother, Sulo, thirteen years his senior, somewhere along the way there was a miscommunication of details, and this resulted in an error on his birth certificate, although he was born on June 24th, it states June 25th.  Dad liked to chide Uncle Sulo about this, but Uncle would just say “He’s just damn lucky I got the gender right.”

As a youngster, Dad grew up between Northern Ontario and Saskatchewan. His father passed away when he was ten and his mother turned to her Finnish family (the Tryyki’s, Kallio’s and Joki’s) for support.  He talked fondly about growing up in the country, near Dinsmore;  with a sauna house in every yard, cross country skiing to the neighbours in the moonlight, driving a horse and wagon to pick up farm kids for school, he once said that as a young man he never travelled anywhere without a ball glove, just in case he happened upon a ballgame or an opportunity to play catch.  He loved sports but he was particular; he liked ball, tennis, golf, curling and hockey; but he did not care for football or basketball, he said you had to be abnormal to play those games well, extra tall, or extra-large, with baseball anyone could play, that was dad.  He had his little rants about certain things; like the CBC, car racing or how to pronounce “schedule” (– it is “sked yule”, by the way, his explanation was logical “after all you don’t say shool for school”).

As a young man he left the farm life behind and became a journeyman welder by trade.  He worked for a variety of companies – he would tell stories about working in northern Ontario with his brother, in -45-degree weather, weather so cold they would empty the engine oil into a bucket and bring it into the camp shack to keep it warm.   He would talk about working for Dominion Bridge and name bridges Edmonton that he worked on or the Victoria School flagpole (that still stands) or projects like the Big Horn Dam.  Later he worked in mines and in the late seventies he went to work for Echo Bay Mines.  This would be where he worked until his retirement, he worked in Port Radium on the Great Bear Lake until it closed and then went to Lupin Gold Mine, which was 40 miles inside the Arctic Circle.

He met and married our mother Leona Margaret Beaulieu in the sixties, and they had three daughters, as this was during his nomadic period, all three of us were born in different provinces: Frances in Thunder Bay, Ontario, Kathleen in Edmonton, Alberta and Jacqueline in Squamish, British Columbia. After our mother’s passing it was extremely important to our dad that he keep good ties with our mom’s family both in the city and in the North, dad’s door was always open for a visit, and he made sure we were in close contact with all our Beaulieu relatives.  It was also around this time he finally set permanent roots in Edmonton, where he remained until his passing.

Dad was a voracious reader.  He worked long periods in camps so he would take a pile of books with him when he was heading out, I would estimate he read tens of thousands of books in his lifetime.  Robert Ludlum, John D. MacDonald, Sue Grafton, Elizabeth George, Steig Larrson, and Alfred Hitchcock were just some of his favourites.  And when he liked an author, we all would know, I am pretty sure he bought “The Girl With the Dragon Tattoo” for a dozen people, some of us got it twice, he loved that series.  I once asked him what he was reading, and it was a book about Germans working in a mine in Brazil, and it had been written and translated from Swedish. His taste was wide, he particularly enjoyed Icelandic mysteries for some reason.

He was also very creative, he loved to cook and bake, many a co-worker of Jacquie’s was blessed with the delicious oatmeal cookies that he would take to her office.  He cooked a mean béarnaise chicken, he made his own lemon curd and marmalade, he liked to supply us with homemade beef jerky and for a short while, he made his own beer- he even devised a gadget to pull lemon slices out of Corona bottles because those were his favourite for bottling.   He was an environmentalist, he believed in using public transit, he believed in supporting libraries, he did not like to collect too much, he would say books were to be read not hoarded on shelves. I loved to get books from him because he would slip little newspaper articles, recipes or book markers into them, little “bonus” things.  He would pick bottles, not because he needed the money- he always gave them to his grandsons, Ethan and Erik.  He picked bottles because he did not like to see the waste, he was definitely not wasteful.  He would feed his scraps to the birds, he was always on the look out to clean stuff up and  he told me that once he was waiting for a bus and while he was waiting he picked up some garbage from the street and put it in the trash and while he was at it he grabbed a couple of bottles out of the garbage can and a gentleman came by and thanked him for doing such a good job and gave him five dollars, when I asked him how he responded he said “ Well, Francie, they have a strict anti-harassment policy about panhandling and I didn’t want to argue with the guy so I shoved it in my pocket and got the hell out of there”.  That was our dad!  Often on his travels he would pick up treasures that others had abandoned or dropped, and he would pass them on to us to see if we could find someone to use them. He always seemed to find stray socks and fill them with change for his grandchildren, and not nickels and dimes, it was loonies, twoonies and quarters, the kids loved to get his “sock money” as he called it.  He could not leave a piece of wood behind; he used them for building projects.  I always wonder what the neighbours thought when he was hauling lumber up the elevator or sawing and pounding away in his high rise.   He kept himself busy building little shelving units and stands or making adjustments to previous pieces.  His grandson once remarked that with just some popsicle sticks and twist ties Grandpa could fix anything.

As a younger man he had his stomping grounds, places like the Grand and International Hotels, but none was more famous in our family than the beloved Cecil Hotel, Dad had lived there as a bachelor and cooked his meals in an electric frying pan, I believe he lived there when he met our mother.  When they were old enough, he took his grandsons, Tristan and Tremaine there for haircuts from Ron, the barber.  And back when we were old enough, we were all initiated into adulthood by drinking there, at least once.  It was one of the first places he would visit when he came into town from camp.  He could catch up on all the happenings and visit with old friends and make new friends.  As a matter of fact, most of his adult life was spent living in the downtown part of Edmonton.  He loved to roam around downtown on his scooter, he would go to “Horton’s” for his favourite sandwich, Audrey’s Books, he would buy popcorn from Kernels, he would visit Erin or James at Market Drugs, he would get Royal Pizza, he had his routines, and his life was full.  Unfortunately, time can be our enemy, and aging was not kind to dad, he struggled with loss of ability and independence.  We take comfort in knowing our dad is at peace.  So while we are so very sad for our loss we are so very, very thankful that we were blessed with such a kind and generous man for as long as we were.

Our Dad has left us for the spirit world, he is reunited with his family- his mom, dad and  siblings and other loved ones; Willard, Jean, Uncle Bill, his former wife, Leona;  maybe he is having a cold one at the Cecil with his old friends- like Ron, Wasil, John Z., Margie, Noreen or countless others, Dad was a friend to many.

In remembrance of our dad, go feed the birds, take a book out of the library, use public transit, have a slice of Royal Pizza, but whatever you do, do it with kindness and generosity because that was what embodied our dad.