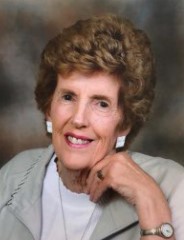 Carolyn Alice McRae, also affectionately known as Mum, Grandma, Aunty, and Carol, passed away peacefully in her sleep of an aortic dissection in the early hours of Thursday, October 7th, just days before her 84th birthday. She was predeceased by her first husband Roland Sasges (1974), by her second husband John McRae (1980), and by her brother Ron (2018). She was the beloved sister of Lin (Bud) and Ron (Diane). Left to mourn her passing are her (Sasges/McRae) children, Joanne (Brent), Sharin, James (Christina), Donna (Debbie), Craig (Chantal) and Bruce (Johanna), as well as her grandchildren Anthony, Jennifer, Jeremy, Ben and Laura, her godchildren and many others touched by her kindness and lifetime of service.

In lieu of flowers, please send a donation to a Catholic charity of your choice.

Carolyn was born in Vancouver on October 16, 1937 (though sometimes it was 1967, or whatever year made her 39 years of age). She was the first born of Ralph and Laura Grantham. Sister Lin and Brother Ron followed. After graduating high school with honours and taking a secretarial program, Carolyn worked as the executive secretary for the Treasurer of the MacMillan-Blodel Company. Once she’d finished raising her 6 children, Carolyn returned to school to graduate from Newman College earning a Diploma in Theology. Carolyn worked until her retirement as a Pastoral Care Chaplain at the Edmonton General Hospital.

Carolyn was committed to her family and was a loving, stay-at-home mother. Raised in Vancouver, Carolyn married her high school sweetheart Roland J. Sasges in 1958. They had 5 children: Joanne, Sharin, James, Donna, and Craig. The family moved to Surrey and then Rossland BC, Edmonton, and then Sherwood Park. Roland tragically and unexpectedly died in an industrial incident at a refinery in 1974. Carolyn married John F. McRae in Riviere Qui Barre in 1975. They had one child, Bruce. In 1980 John died of an aneurism at home in his sleep, and Carolyn unexpectedly became a single parent again. Carolyn kept her family living in the country until 1993, when she and Bruce moved to St. Albert, the place she lovingly called home until her death. She kept in touch with many people who became like family over time, even informally “adopting” some, forging meaningful connections and lasting memories.

Grandchildren arrived in the autumn of Carolyn’s life. She always loved the fall best, and trips to the east coast allowed her to enjoy the fall colours, and her new role as Grandma. Carolyn loved being a Grandma and made the most of building close bonds with her next generation, whether they lived near or far away. Baking, sleepovers and special outings with her were mutually enjoyed activities by her 5 grandchildren. Many family trips now included Anthony, Jennifer, Jeremy, Ben and Laura, making those adventures extra special to her. During a cruise to celebrate her 75th birthday, Carolyn did the zip line, twice, to remind us all she was still young at heart.

Throughout her life Carolyn was very active in the Catholic Church, often in the choir or leading one or playing the organ. She had a beautiful voice and loved to harmonize. She was also a very active and “sometimes too busy volunteer” in her community – the pages in her Day-Timer agenda books were always full! Many of her social justice work was channeled through community organizations like the St. Albert Bereavement Fellowship, the Associates of the Grey Nuns, Catholic Women’s League (CWL), Morinville Minstrels, the Red Hat Society, Grandmothers for Africa and Operation Friendship. Her participation and contributions in leadership roles were appreciated by those she served and those she served alongside. Carolyn received the Community Outreach Award from the City of St. Albert and the Queen Elizabeth II Diamond Jubilee Medal recognizing her volunteerism.

Carolyn was smart, beautiful, caring, loyal, capable, and assertive – she knew what she wanted and wasn’t easily deterred. She had an adventurous spirit and endless curiosity. She enjoyed travelling, whether near or far. Some trips had a religious focus, while others were because she had an unending quest to know more. She was an ‘information analyst’ before there was even a term for this function. She had a keen love of words, which she enjoyed through games like Scrabble and stories like CBC’s Vinyl Cafe. She had a strong sense of compassion, and shared empathy with many people from every walk of life. Music was an important part of her life. Carolyn played the organ throughout her life and loved a toe-tapping melody. She shared her joy of music through piano lessons. Carolyn had a beautiful smile and sense of humour (some of her jokes could even be described as risqué). Carolyn’s favorite colour was fuchsia, she always strived to remember other’s milestones with specially selected greeting cards and, she loved a good milkshake.

Carolyn was a devout Catholic. She believed in the Father, Son and Holy Spirit. She believed in the intercession of Mary, the saints and the departed, all of these being accessible to us for support in times of need. Carolyn devoted time to play the organ at thousands of church services over her lifetime and spent countless hours in adoration, prayer, meditation and retreat. As Carolyn once told us…”my faith has sustained me and brought me peace and solace through an awful lot… God has been good to me and to our family. He has given us good strong roots, albeit with some bumps now and then.”

Carolyn always hoped for a quiet death. Three nights before that happened, Carolyn went by ambulance to the Sturgeon Hospital, and was then moved to the University Hospital where she was diagnosed with an aortic-dissection by the Mazenkowski Heart Institute specialists; the only treatment option was open-heart surgery, but the specialists did not expect Carolyn to survive the long recovery period. Our family was told she only had hours to live, and then Carolyn gave us two days more so we could say our goodbyes. She was in no pain, she was cognizant and humorous until the end. Prayer circles were mobilized across St. Albert and the surrounding areas. Masses were said for her literally all over the world. The day before Carolyn died, a mass was said for her in Rome and she was serenaded by a choir of Nuns (all arranged through the Nguyen family to whom Carolyn was also “Grandma”).

Carolyn did have a quiet death, it was just preceded by some meaningful, prayerful, fanfare. And during the past days and weeks our family has been repeatedly reminded how beloved Carolyn was to so many in her lifetime. Carolyn died peacefully in hospital during the night with her daughter Sharin close by – Sharin who has shared her company and lived with Mum for much of the last 20 years, and in more recent years served selflessly as Mum’s caregiver. We are so grateful that our Mum died peacefully surrounded by love.

Her granddaughter, Jennifer, recalled their final visit at the hospital. “Grandma’s passing was sudden, but it was spent surrounded by people she loved. Grandma told me she had no regrets in her life. She’d traveled everywhere she had wanted to go, she had cared for so many people and she’d lived a good long life. She told me she wanted to have one last good visit as a goodbye. She and I for years had been huge fans of CBC’s show the Vinyl Café with Stewart Mclean, and we share a favorite Dave and Morley story called the Waterslide (She’d be honored I’m sure if you listened to it https://youtu.be/eOot4BEkE48). We laughed and cried a bit. She told me she was glad she got to see where my life was headed even if she couldn’t watch it play out. I’m sure the same is true for the other young adults in her life.”

Being twice-widowed, Carolyn had considerable personal experience with grief. This is a poem she loved, and she often shared with newly grieving members of the Bereavement Fellowship. Carolyn would want you to take these words to heart on her behalf.

To Those I loved & those Who Loved Me

When I am gone, release me, and let me go…

I have so many things to see and do.

You mustn’t tie yourself to me with tears;

Be happy that we have so many years.

I gave to you my love, you can only guess

How much you gave to me in happiness.

I thank you for the love, you each have shown,

But now it’s time I travelled on alone.

So grieve a while for me (if grieve you must);

Then let your grief be comforted by trust.

It’s only for a while that we must part,

So bless the memories within your heart.

I won’t be far away, for life goes on;

So if you need me, call and I will come,

And if you listen with your heart, you’ll hear

All of my love around you soft and dear.

And then when you must come this way alone,

I’ll greet you with a smile and say, “Welcome Home.”

Carolyn lived God’s call as a faithful servant. In true commitment to her beliefs, she surrendered to God’s plan right to the end. She is surely in heaven, “catapulted directly up” as one person put it, holding an “express pass” as another said. It’s not hard to imagine that she got a standing ovation when she reached the pearly gates. There are a lot of people Carolyn touched with her love that are waiting for her there.

And last but not least, Carolyn was always grateful for the numerous ways in which she was cared for by others. We especially want to thank the home-care staff, kitchen staff (she often couldn’t decide between the 2 entrées), and all the staff and administrators at Chateau Mission Court; as well as the medical staff at the Sturgeon and University Hospitals, who cared for her during her brief hospital stay. She will surely be praying for you from up above. 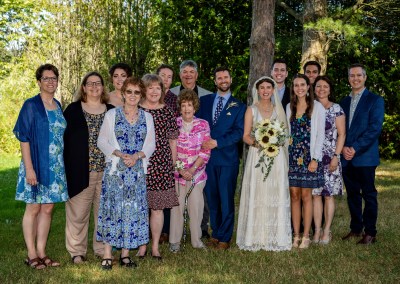 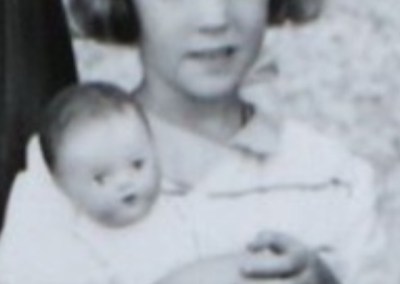 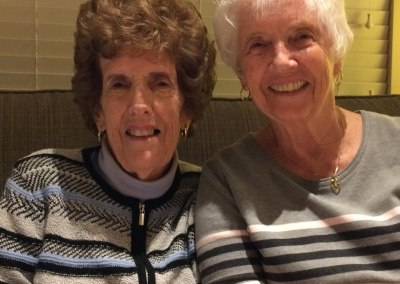 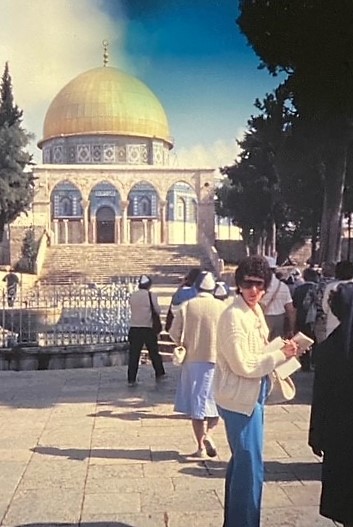 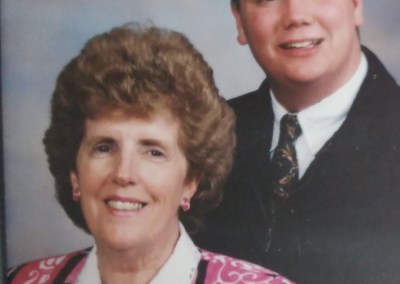 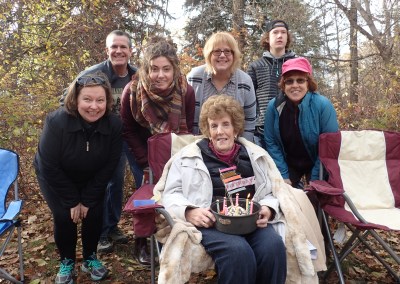 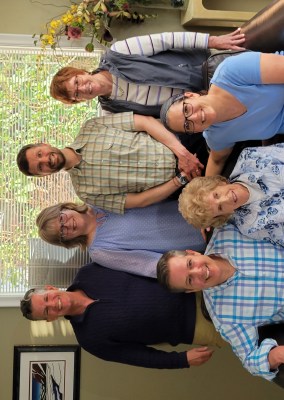 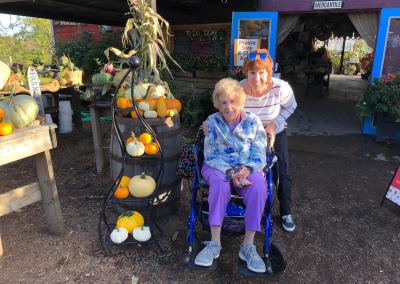 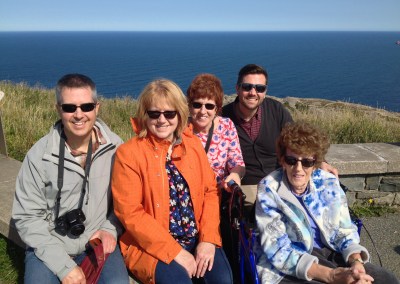