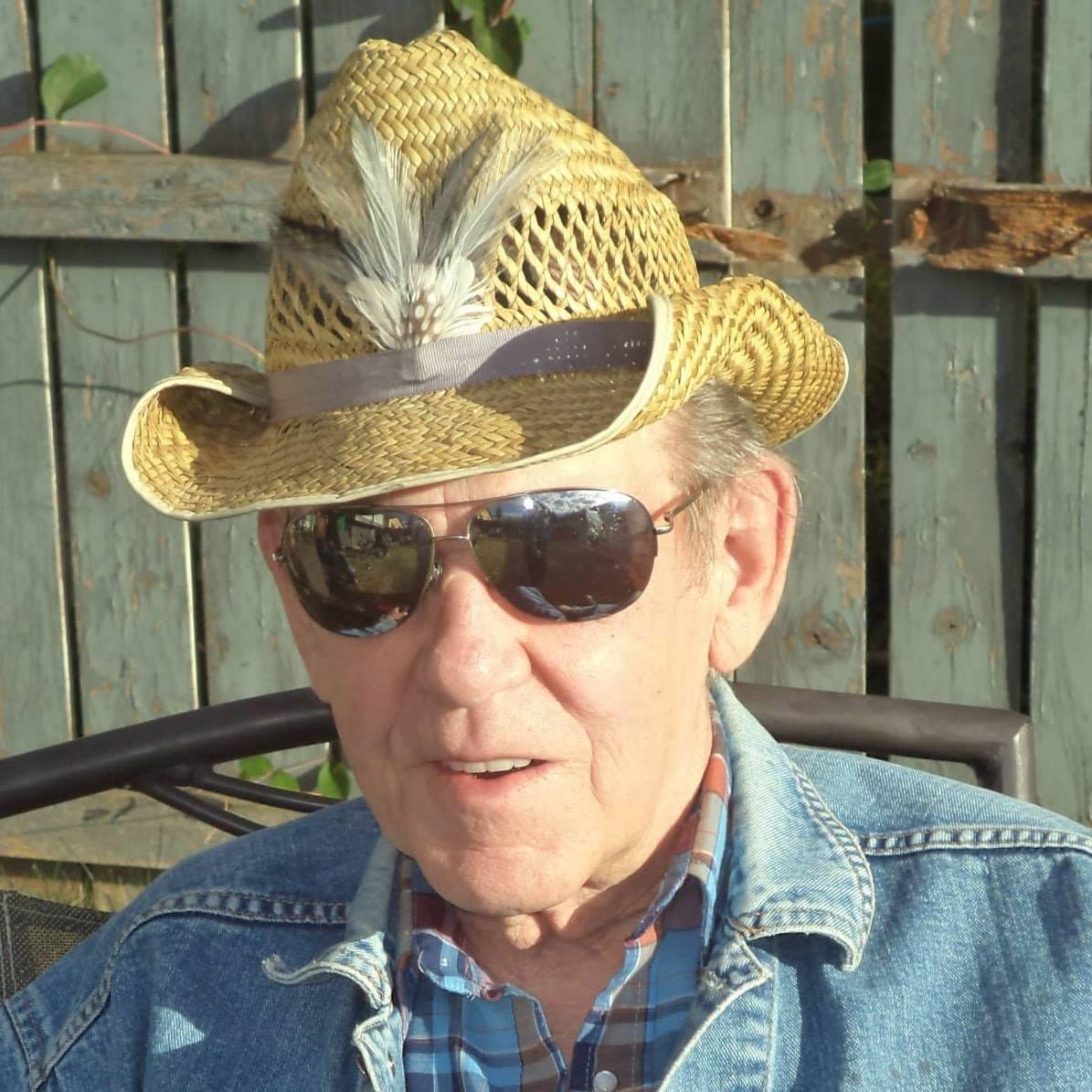 Not all heroes wear capes. Ours wore a fedora and cowboy boots.

Growing up Papa was always working. I knew him and I saw him, he was in my life, but more abstractly. Nan took care of the day to day. When she passed away I truly got to know who he was and I loved every minute “getting to know” him. There wasn’t a problem he couldn’t fix or a question he couldn’t answer (even if he took the round about way answering it). I would tell him that by the time my question was answered sometimes I’d forgotten what I had asked

We saw each other every day and talked on the phone. I’ll miss him saying “and that’s my bitch for the day” and laughing. He loved gossip

To share and receive it. We’d hash out whatever the latest news was like 2 little old ladies.

Always the “wild child” of the family, it’s been said that one never knew when Robbie was coming or going. This is something he never outgrew. If there was an adventure to be had, he would find it.

The stories he told of his 50 years in the trucking industry could either curl your hair or make you laugh until you couldn’t breathe.  Some of them left you wondering how he made it out in one piece. The one of him and Uncle Al getting chased out of Texas is one of my favourites. Even in their older years the two of them were trouble when they got together.

There is not a person on this earth that worked harder than he did. From his first job delivering bread at 9 years old, to running a service station at 14 to building his trucking business from the ground up he was determined to succeed and succeed he did. He could drive (and fix) anything on wheels. He once diagnosed our truck problems from listening on the phone for 30 seconds (with OUT his hearing aids in).

He had the gift of gab. There was rarely a person that he wouldn’t talk to. If you had the time to sit and listen it was a guarantee that you would leave the conversation smarter and wiser than when it started. His nickname was “The Wizard” and he 100% earned it. He was hands down the smartest man I knew.

He recently spent the day telling Mom his life story. She says that of all the years she’s known him this is her favourite memory of him. Well… that and the day they drank a case of beer while they were supposed to be prepping the house for a Christmas party.

Rain or shine, sickness or health, he would unfailingly cook Sunday breakfast for his loving band of hooligans. It was the hottest ticket in town and to be fed by him was to be loved by him. The more the merrier was his motto.

Every morning visit of mine included a lesson in the stock market. It didn’t matter if you had no clue what he was talking about he was going to try and teach you. In his “retirement “ years a good day was marked by how much he was up.

His “psychiatric therapy” was attending auction sales. Chris and him would go every chance they got, walk the lots, pick the ones they wanted to keep their eyes on, come home with the book which he would then mark down what price he THOUGHT they would go for, what price he was WILLING to pay and then what price it actually went for. His guesstimate was rarely wrong and at one point I worried the neighbours would think we were all drug dealers because it was rare that the cars in our driveways didn’t change every 6 months.

When Robbie was born, Papa gained himself a new best friend. From the time he could talk Robbie was all about Papa and from the time he was born Papa was all about Robbie. Robbie would go there for second breakfast (and lunch and dinner). Papa often joked that he would have to sell some stocks just to keep up with Robbie’s appetite. Robbie became his shopping buddy, his berry picking buddy and his bottle depot buddy. They took (unknown to me) trips to the liquor store. Robbie assured me that he only ever got ginger ale and only after Papa made sure there was no booze in it. After school bike rides always ended with cookies or ice cream for everyone Robbie showed up with.

He wasn’t a mushy guy (although in his later years he did get a bit “leaky”) but I never left that house (in all my 36 years) without an I love you and a kiss. Same for Robbie. He told me that the first time he held me he was determined not to like me. He said that I looked up at him and he looked down at me and he was sunk. After that he was the man that pulled me around the house in my sled, walked me through downtown with balloons tied in my hair and spent an entire Christmas Eve, into the wee hours of the morning, putting together a Barbie camper cussing and swearing to beat the band (as the story goes).

He briefly got into video games and spent an entire night trying to win at Marios Bros. When he finally got the Princess he ran around the house, opening bedroom doors shouting “I got her! I got her!”

Saving money was the game and being thrifty was his name. Waste not want not was the mantra of my childhood. He would describe himself as a “cheap old German bastard” and liked to tell me that the “reason he had money was because he acted like he didn’t”. I was only allowed to fill my gas tank Mondays and Thursdays at the Domo because it was 4 cents off a litre. Hell, hath no fury if I needed gas any other day of the week. He liked a good bargain and wasn’t ashamed to brag about what he paid for something. He didn’t speak in dollars. It didn’t matter the price tag…what was the percentage? He said his Dad taught him to look at the percentage and let me tell you the lesson stuck.

When Mikey was little Papa would always tell him “I the Good Guy” and almost 50 years later I’ve never once heard Mike call him “Uncle Rob” it’s always Good Guy. Talk about picking the perfect moniker for yourself

He asked me about 2 years ago what cats ate. I of course responded with “umm…cat food?” He replied with “I’m not buying cat foot” turns out he was feeding the neighbourhood stray (who we named Mooch). If you knew Papa you’ll know that this was not something that he would do. He didn’t like cats. Full stop. So, the fact that he bought the cat food and lovingly and unfailingly fed that cat every night & morning is mind blowing. Even knowing that at least 2 other houses on the street were feeding the same cat he had to make sure that Mooch was fed.

He was stubborn. Oh my god was he stubborn. There was one way to do something and it was his way. Even when his way was wrong

Mom did his laundry not long ago and he was amazed at how CLEAN the laundry was. Turns out that Mom didn’t follow his very specific laundry instructions and instead followed the instructions on the bottle. Who would have thought?

Everything written here seems quite insufficient when trying to sum up Papa. Over this past week there has not been one person who I’ve told that hasn’t choked up. Being told over and over again how amazing he was and how much he’ll be missed has been incredible. I think that’s a great testament to the man that he was

You will be forever missed. Thank you for everything you did for me (and us, everybody). Thank you for the Sunday breakfasts, the free babysitting, the early morning stock lessons & gossip sessions, helping me solve all my problems (while only occasionally rolling your eyes), not screaming for dear life while I drove down the Yellow head, and making sure that when the day came that you couldn’t be with me any longer teaching me how to stand on my own 2 feet and be a woman that you were proud of.

Rest peacefully Papa, you earned it.

“… I’m forgiving everything that forgiveness will allow

And there’s nothing I can do about it now” 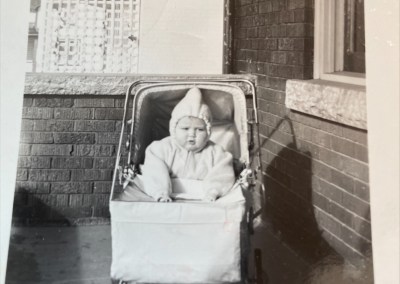 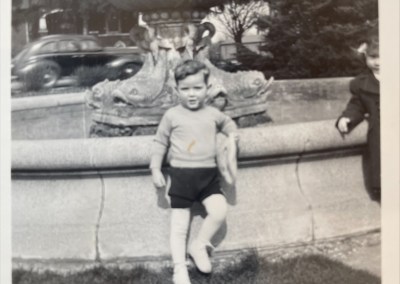 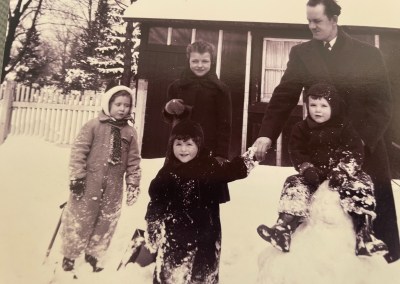 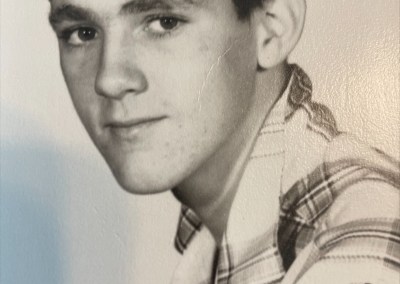 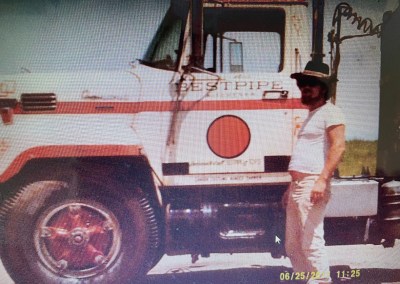 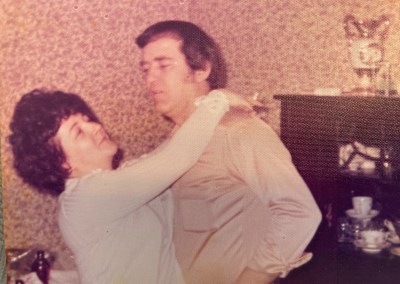 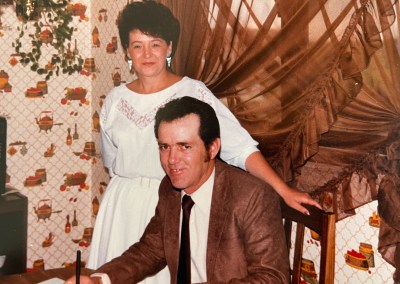 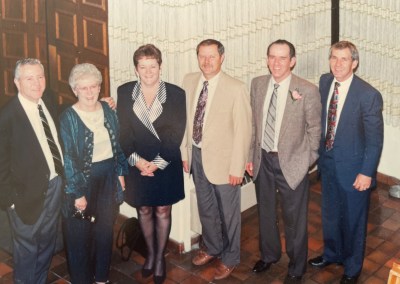 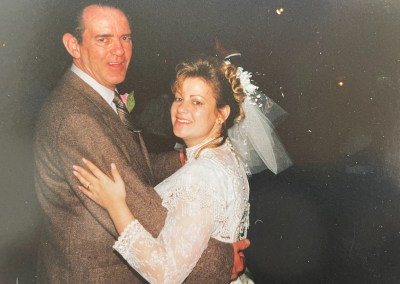 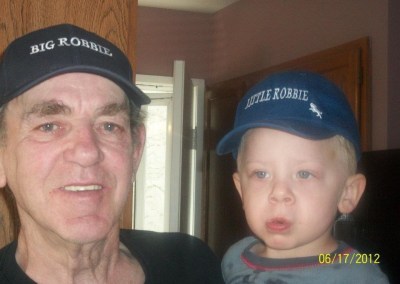 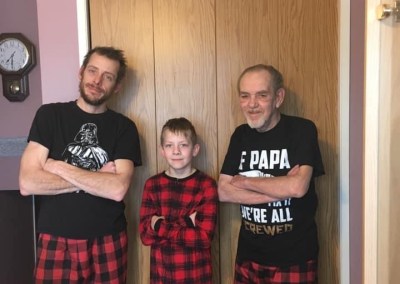 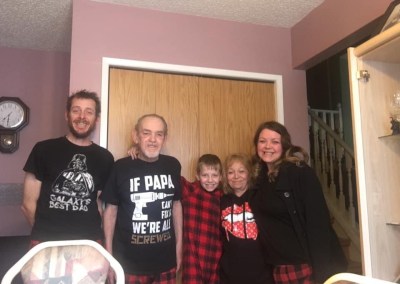 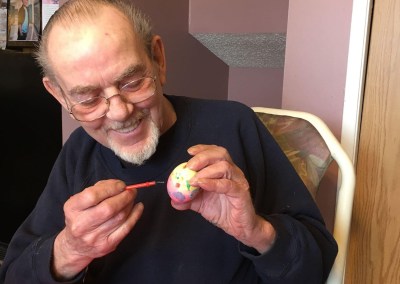 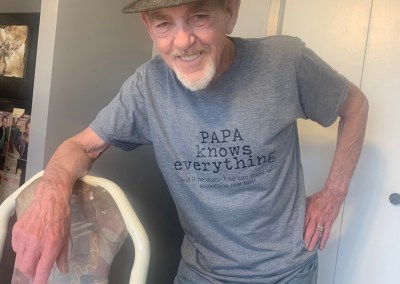